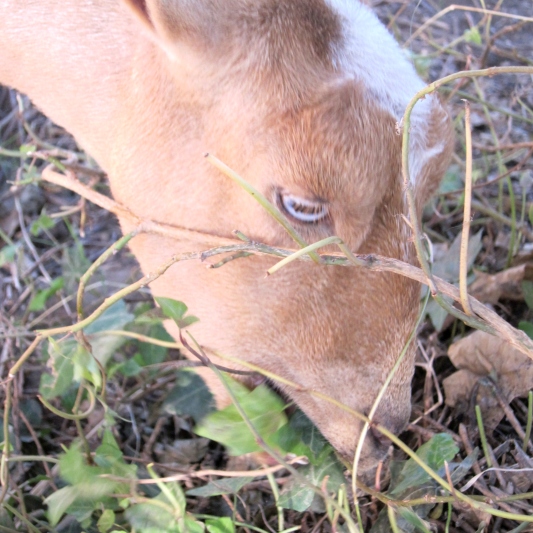 If you have goats, you know they beg like dogs, but now it’s official, according to researchers in London. Our goats stand at the gate to their pen and stare longingly at our back yard, begging to come out and eat the landscaping. Really, we haven’t had time to landscape yet and besides the trees, there’s mostly weeds, a little ivy, and a very ugly jade plant I haven’t had time to dig up. Well, the goats took care of that for me. All winter they ignored the ugly jade plant and I actually shooed them away from it worrying it might be poisonous. I looked it up online and it’s fine, but I figured they wouldn’t eat it (since it’s so ugly, right?) Little by little they’d sneak tastes and then one day they finished off the whole thing. Then they started on the ivy, which had been ignored in favor of tastier weeds. Pat Coleby advises in Natural Goat Care that does should be given a couple of ivy leaves after kidding. She doesn’t say why, but I followed her advice, but had no takers back in March. Apparently ivy doesn’t taste good here in California until July.